If you want to dress up like the Baseball-bat wielding psychopath Harley Quinn from the blockbuster movie Suicide Squad, there are some compelling options.

The Suicide Squad super-villain costume is one of the more sought after costumes this Halloween.
With her feisty personality and cool look, it’s no surprise that many want to dress up as Harley Quinn for Halloween parties.

Harley Quinn’s character saw a recent surge of popularity after Margot Robbie stole the show in Suicide Squad with her portrayal of the role.
On the surface Harley is a loveable, flirty character who is in love with the Joker and refers to him as Puddin’, but her story is fairly tragic.

Before she was the Joker’s lover, Harley Quinn was Dr Harleen Quinzel, a psychiatrist at Arkham Asylum.
But she shredded her Hippocratic Oath when she hopped into bed with a mass-murdering, psychopathic patient and began a crime spree that would make Bonnie and Clyde wince.
In the 22 years since she first entered our world as a one-off character in a Batman cartoon, she’s occasionally made the world a better place – but it’s usually by accident and never for truth, justice, and the American Way! 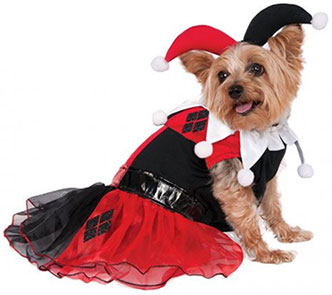 You have to watch the movie to really experience the extent of her psychosis!
She’s a thriller, to say the least, and her costume cannot be underscored.. it screams Come and Get Me!
For Halloween revelers, this costume needs no introduction..

To re-create Harley Quinn in the flesh, the best costume for Halloween is probably the officially licensed Suicide Squad Harley Quinn costume from Rubie, the material makes it look just authentic!

It’s a full outfit that includes fishnet tights, a belt, shorts, a jacket and a top.

Your fans will swarm you the moment they lay eyes on you!