Captain America is a Superhero with a huge fan base across the globe!
Created by Joe Simon and Jack Kirby for Marvel Comics under the mask of Captain America, is Steve Rogers. His character was given a type of growth serum in the military to turn him from an average male to a type of super soldier who was big, muscular and strong. His distinctive image is perfect for Halloween costumes this year.

Captain America fights for his country dressed in colors similar to the American flag in honor of the military that created him. His main suit is a medium blue color, with the center being red and white stripes. Captain America wears a half mask, with small silver wings on both sides of his head. He fights crime not only with his physical strength, but with his indestructible shield.

Captain America has regained his superhero popularity by being part of The Avengers 2012 movie, and has become one of the most popular Halloween costumes. It is so popular that the costume is available from children to adults for both males and females.
Check out these amazing reviews for this Captain America Halloween Costume for adults here before it’s too late! 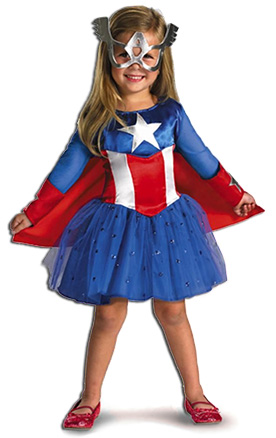 The kids’ Captain America Halloween costume comes in a regular and deluxe styling, and price can run up to $30. The beauty about the boy’s costume is instant street cred, especially when the costume is the deluxe version.. there’s no denying that other boys will be clamoring around the best dressed over Halloween, and this status can last right into Christmas, I kid you not. So be on the lookout for new friends wanting to come over for sleepovers with the new hero in town so to speak! Just make sure you have cookies and what-have-you to amuse the new hangers on to your boys!

Check out the deluxe version of the children’s Captain America costume, which comes with a muscular top jumpsuit to signify his size and strength. You’ll fall in love with the mask with silver wings on each side of the hood! 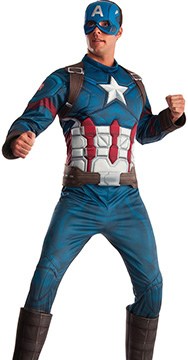 What’s there not to be said about the men’s Captain America costume?
Sure, everyone wants to dress up like a vamp, but that’s a horse that’s been flogged time a dozen! Dare to be different this Halloween! This Captain America costume will be the envy of your office posse, not to mention the missus will want to lay her hands on you and probably tear you apart, piecemeal!

Whilst it’s commendable that most parents tend to purchase super hero costumes on Halloween for their kids, nothing’s as low down dirty shame, as arriving at a party on Halloween eve, dressed as a bed sheet!

Sure, splurge on them kids, let them have lasting memories of Halloween, but dare to dress up and look like an authentic superhero too!
Your kids have never seen you decked to the nines as a Superhero, so make this eve super special for you adults too!
Feeling bold this Halloween? Check out this Steve Rogers’ Captain America Costume.. and look buff beyond compare on the eve of Halloween!

Wanna look foxy this Halloween and get all the Halloween party revelers howling the moment you walk in?
What better way to make this happen, than with the women’s version of Captain America’s costume! It’s a sight to behold, whether you desire to dress up as the Winter Soldier, or the Avengers’ version, complete with skirt and red knee high boots, this October 31st’s your moment to shine!
Get ready to read all about how fabulous you looked in the next day’s local edition of what goes down in your city!

The women’s Captain America costume is simply amazing.. you have to see it to believe it!